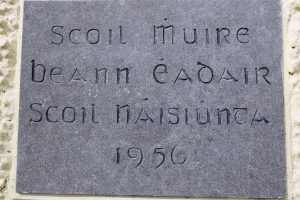 On May 20th 1956 Scoil Mhuire, Beann Eadair was formally blessed by the Archbishop of Dublin, John Charles McQuaid, and opened by Captain Gainsfort St. Laurence.

Much use was made of local materials such as the reddish-brown Howth stone of the walls, in its construction. Since then the building has developed and evolved, most obviously with the addition of the Canon Thackaberry Wing and the school hall. We are now in our seventh decade of education, sport and comm
unity involvement on this hillside site.

The number of children attending Howth Primary School has increased by over 100% in the last ten years with a major extension project due to start early 2018.  In 2016, the school celebrated it’s 60th anniversary.